Father Christmas, in his wisdom, decided to give my daughter perfume for Christmas. A celebrity endorsed pot of stink. Needless to say, she absolutely loves it and sprays it on with wild abandon. Now we can all enjoy living in Barbara Cartland’s liquorice bonbon boudoir.

Someone find me an emergency wet Labrador and a bag of ferrets!

Isn’t it time our teenagers had the chance to wear good quality clothes? I’ve seen trousers so perished, so covered in holes, the poor darlings are wandering around town in sub zero temperatures, buttocks falling out and looking like they’ve had an argument with a lawn mower. Time for action, write your MP and your council. Teens need trews. #trewsforteens

Hey Hollywood, here’s a film idea for you….

It’s the school summer holidays and a giant play dough monster decides to have a fight with a bucket of jam in a carer’s home every day for six weeks. Just add Angelina Jolie in a onsie chiseling vomit off a bean bag at 11pm, then BOOM! Box office number one!

Carers are highly accomplished you know, we actually defy human evolution. One pair of eyes on the kids, another pair of eyes on the dogs who are with the kids in the garden. The eyes in the back of our head watching the tea cooking and several pairs of arms doing washing, bum wiping, cleaning and medical/DWP paperwork. I’m surprised we don’t all look like a boss eyed Dr Who extras.

After consecutive nights of disturbed sleep (thanks to our delightful daughter), my despairing brain actually tried to give me some rest last night by dreaming I was in a coffin. Not actually dead, but lying peacefully in an elaborate dragon shaped coffin….. whilst my daughter repeatedly knocked on the coffin lid and shouted at me

I’m looking forward to tonight’s dream, if I’m lucky I’ll be impailed on a spike whilst some small child demands jaffa cakes!

When your child keeps stealing the cardboard tubes you’ve been lovingly saving so you can build a replica Hogwarts….just so he can have his own disposable trumpet. 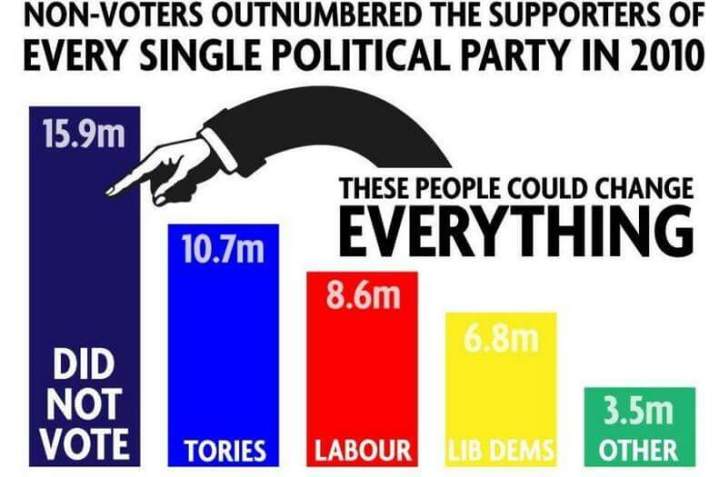 So a snap election is imminent. The political opposition has never been weaker and it’s easy to think what is the point? Truth is, the political elite have had it far too easy for too long. The Conservatives are walking unchallenged all over social care, NHS and Education. There is great unrest among educational & medical professionals, many are leaving their professions. Our young people are facing massive debt, pitiful pensions and the prospect of working into their 80s! This is appalling! Don’t stand for it! If we leave voting to the rich and the middle class grey army, we’ll be ruled by a Government that ignores the young, blames the vulnerable and lines the pockets of the rich. This cannot go on! Make sure you use your vote 8th JUNE.

Have you noticed the new trend of advertising?

Banks, multi nationals, supermarkets, they are all seducing us by tugging at our heart strings.

So basically we’re all supposed to just forget that the Banks screwed people over, ripped them off and ruined their lives?

Companies and Banks that are little more than thieves, swindlers, fraudsters. Peddlers of obesity and diabetes. Destroyers of the environment and profiteers of suffering……

But Oh! look it’s an advert with glitter, kittens and rainbows….oh well then of course you’re forgiven for being morally bankrupt parasites!

‘Gogglebox’. What seems like endless hours of watching strangers, who I have no interest in, comment on television programmes that I never watch.

Let’s not forget those other televisual gems: ‘a day in a hospital’, ‘exciting car crashes, dead or just badly maimed?’ and of course ‘screaming women in labour’.

Then we have the staged versions such as ‘Creosoted toffs of Chelsea’ and ‘tangoed teens of Tyneside’ etc. (you get the idea!)

The news stands have also drip fed us bullshit for years so now its the norm. ‘womens magazines’ are merely catalogues of sensationalist hate, charging you money so you can read how you could be hotter and thinner and ‘omg look at the state of her!’

What do we gain from all this? There’s no stimulation of imagination or learning, no enhancement of wellbeing.

Why are we being fed voyeurism television and trash reading?

Junk makes you distracted, vegetative and compliant.
Now who benefits from that?

So you’re in your local Super Market / soulless grocery leviathan…and you need shampoo. Then you are faced with an entire aisle of hair soap. All lined up like enticing plastic soldiers, luring you in with promises that might temporarily ease the deafening lead klaxon of self loathing. Because let’s face it, the media wants you to know you can do better, no matter what hair you have, you need it better!

We are humans, we just need to shampoo a small percentage of our body hair. I would have thought dogs would need more variety than us as they’re covered in hair, and what about horses, buffalo, lions?  I’ll wager your average orangutan needs fancier hair soap than you.

Purfumes are another weird one. It’s not Georgian times you know! We have passed to time of having to cover the smell of our rotten teeth and gangrenous gussets.

Here’s an idea, just have a regular wash with some soap and save yourself a small fortune on perfume. Plus you won’t smell like a prostitute’s armpit in a candy cane factory.

For more info about Cockaynes Syndrome…

visit www.amyandfriends.org Find out about Cockaynes Syndrome and how you can help a family like mine.
Loading Comments...